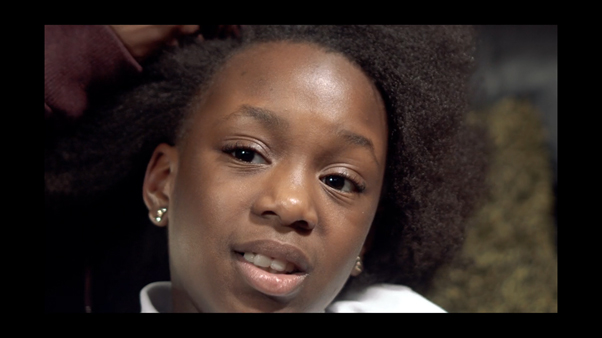 Learning to love the kinks and coils in a Black girl’s natural hair, is a coming of age story rarely featured in Hollywood – and possessing that love and acceptance from the get-go, even less so. In this story, 4c hair is larger than life, wild and untameable. It makes the Black girl exposed and open to bullying. Straight and blonde hair that flows past the shoulders is beautiful. She sees this everywhere and so she hides her own.

Black hair is complex, and like most beautiful things, requires an intimate study in order to grasp its nuances. In its natural form, Black hair typically ranges from 3a to 4c. The smaller the number, the looser the curl pattern. Descriptions of curl patterns include ‘loose curls’ for type 3 hair, ‘tight curls’ for type 4 hair, frizzy and kinky.

This hair typing system for Black natural hair was created by Andre Walker, who was Oprah’s stylist for 25 years. Originally conceptualised in the 1990s, he used this hair typing system to market his line of hair products and since then, it has become part of the everyday language around Black natural hair. When the system was launched, it had four categories – straight, wavy, curly and coily. Over time, it developed to include sub-types within each category. Walker’s hair typing system has become popular as it is great for determining how hair reacts to different moisture levels but does not include other factors such as build-up, length, age, porosity and weather, which can all play a significant role in the look and healthiness of Black Hair.

But this just explains the aesthetics, and the language used has been co-opted into the mainstream to describe undesirable hair. Often in commercials and movies, ‘bad hair days’ happen when hair is larger than life, extremely dry and frizzy and is not responding to gadgets such as brushes and straighteners. Life cannot be good without beautiful hair. And beautiful hair is not frizzy or kinky.  Straight and silky hair is then interpreted as an expression of the desired femininity that makes a woman appealing in all areas of her life, from her career to her personal life. On the other hand, frizzy and kinky hair implies being unkempt and unprofessional.

These social cues are impressed upon Black girls from a very young age. From Barbie dolls to cartoon characters and even just listening to various conversations about hair from older women, young Black girls become conditioned to look at their natural hair as a burden. They begin to learn that confidence and acceptance can come from having straight hair. Even a Google search on ‘beautiful hairstyles’ reinforces this. So subconsciously, they begin to desire a different look. One that fits with the dominant conception of ‘good’ hair.

Black natural hair has kinks and curls and coils. It is voluptuous and stands out. Being Black and hypervisible is not an ideal combination, especially for a young Black girl who now understands the negative image her natural hair conveys. She wants to hide her hair from the public, from people who stare, people who touch her hair without asking and peers that mock her.

As a young girl, I had a small afro that I wore to school once. Usually my mum would braid my har on a Sunday afternoon, but I had convinced her to just brush it into two buns. The next day at school, my friends marvelled at how ‘poofy’ my hair was and compared me to a dog amongst other things. They kept touching my hair and laughing at how it only sticks up and its not long enough to reach my shoulders. That evening, I went home and told my mum and a couple of weeks later, she began straightening my hair. Reminiscing on that event made me realise how easy it is to fall into that line of thinking as it is so pervasive in our society.

In South Africa, schools had banned Afro hairstyles, labelling it too “distracting”. Students, as young as 13 took to the streets to protest this form of discrimination, which singled them out for having naturally curly hair. In 2019, California became the first state to legally ban discrimination based on hair. The CROWN Act (Create a Respectful and Open Workplace for Natural Hair) was the first of its kind in America and was followed by a similar law in New York. In the UK, Black students are also being excluded for their hair. But how effective is law from changing societal norms? Would it require backing from the beauty industry too?

Natural haircare can be expensive. That is because for black natural hair to be healthy, retain moisture and length, you need a variety of products and methods. According to the stylist, the black hair industry is worth an estimated £88 million, with black women spending six times more than their white counterparts on hair products.

Some products such as relaxers and texturisers help to reduce the curliness of natural hair to make them straighter and silkier. Relaxing natural hair is permanent and cannot be undone unless the hair is cut off and allowed to grow back naturally. Other products such as gels give the appearance of smooth and less full hair. These products and so much more are options when it comes to making Black natural hair less ‘distracting’ and more palatable.

However, the natural hair movement has inspired multiple generations of young Black women to embrace their natural hair in all its voluptuous glory! It has created a community based on acceptance and support to challenge the societal norms of beauty in their own lives. But above that, it communicates a message of the value of natural hair and promotes self-confidence. This has a ripple effect to other Black women who are seeing themselves represented in media and in other spheres more accurately. A young Black girl is less likely to want to straighten or relax her hair because she has seen a character on TV with the same hair as her, or an older lady at the bus stop. Her peers will be more accepting of her hair; teachers would recognise unwarranted touching of a Black girl’s hair as bullying or problematic and ensure that she gets the right support at school. And maybe those Black girls will also feel more able to stand up for themselves.

Representation is more than just seeing someone else wearing the same hairstyle as you, proudly and confidently. It is about the knowledge pool it creates in society which is very important in breaking down societal discrimination against Black natural hair. The more Black women are given the choice surrounding their hair, the more empowered we will be. Hair is always present, but we need to move past using it as a marker for acceptance and comparison. A good hair day is everyday you walk out expressing your true identity and creativity.

Eileen Gbagbo is an International Relations graduate from LSE.  She has written and guest-edited for ‘The Beaver’, and gal-dem. Eileen is the editor at The Republic, an African affairs journal with a keen focus on cultivating a deeper understanding of African history, culture, and literature.