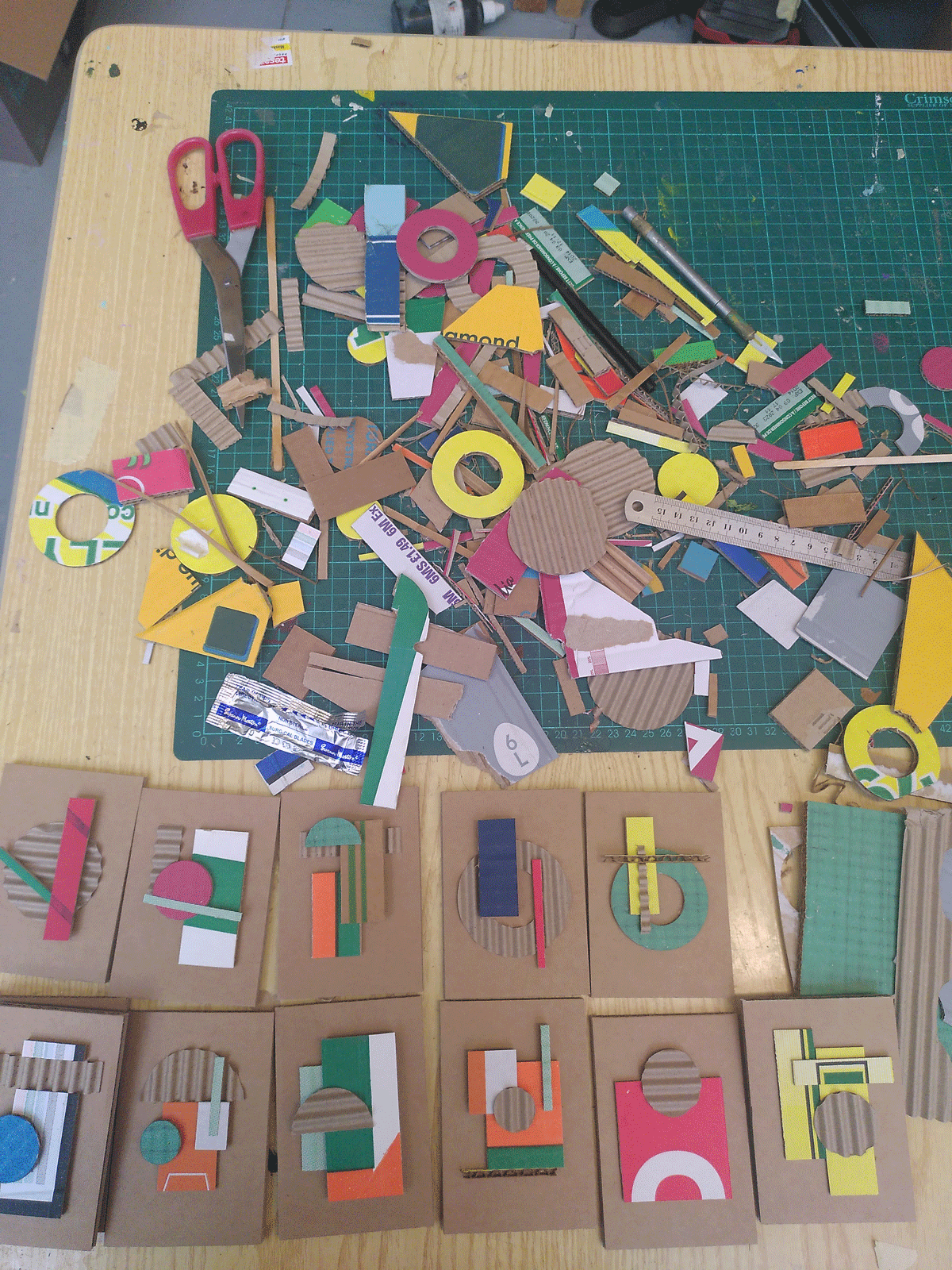 Olly Fathers is a local artist who’s been plugging away behind the scenes for years as a technician installing other people’s shows. He’s recently taken the leap to go full time, and his beautiful pieces of wood veneer are making a well deserved splash. They cast the magic of the craftsman, the intrigue of how it was done, whilst at the sametime making the years of developing the skill manifest as effortless.  The artisan aesthetic in art is a form that artists play with cyclically embracing and destroying, but it seems to be enjoying a resurgence and Fathers is totally surfing that wave;

There’s something very calming about the pieces themselves, beautiful shades of wood veneer in intersecting geometric shapes. The process is Marquetry, which is probably most popular on antique games boards, but Fathers has a really juicy and contemporary take on it. They tread the Scapandi tightrope between classic and fresh, and wouldn’t feel out of place in a Swedish spa or a Japanese Tea House, places of relaxation and unwinding.

‘I think, especially at the moment, I think it is nice for people to have something they can go and look at and just sort of forget about the world. Some people look at certain things that I’ve done, and I find it quite calming and therapeutic, or they can appreciate the craft involved. And I think that being able to create something that someone can go and sort of lose themselves in for a short period of time. Like when you listen to music; Something can just sort of take you away, you get the same from artwork and the colours. The woodgrain is satisfactory, it’s just something that makes people feel happy.’

The aesthetics of the work may have sprouted from the process itself; We discuss how making through a skilled craft feels similar to a meditation, and many of us find a refuge in the making itself.

“I mean, obviously, there’s sort of ideas and conceptual things behind it, but it’s not so conceptual, I think it’s important for me to get satisfaction out of it. For me, the making is really satisfactory. And learning how to do this and getting a really clean join, using the woods, the glueing, making sure it’s all flat sanding it, so it’s all smooth. All these different things are so satisfying. I think my favourite part about making these is the bit when I’m at the point of actually cutting out the veneers and joining it all together, that’s the point for me. I’ve got a lot of stuff going on; And I lose myself in the cutting of that, I sort of go to a different place. And it’s very much a sort of therapeutic, Zen like sort of moment. What I’m thinking about is actually just cutting out the shapes. It feels meditative.”

‘This is a classic piece that I could really lose myself in, because I’d start off arranging them, and then it’s just a case of carefully, methodically cutting them out, that’s just quite a systematic, detailed process. When I’m going through that methodical cutting process like with the offcut pieces, that’s something that I can lose myself in, and that’s why it’s really therapeutic.’

It’s beautiful to see this understanding, of how important this slowing down and rooting through the body, is embedded into the final pieces themselves. It makes me wonder if that’s inevitable, part of our lost heritage as makers-by-necessity, that we are able to tap back into something inherent when in the presence of a product of some highly trained hand eye coordination.

“I think because of the rise of the digital, everything that has been over the last sort of five years there’s an increased appreciation of craft and handmade, actual skill lead things. So hopefully, these things are actually picking up and you do see more ceramicists, and you do see metal workers; The appreciation of that handmade thing. And also people having a go at trying to do it as well, just because people are so stressed. If they can go and spend, you know, whatever the price is to go and do a ceramic course every weekend or go into glassblowing or something like that. Not to be incredibly good at it. But just to go and lose yourself in I think there is an increased appreciation of that.”

There are several aspects to Fathers’ work that speak to this recapturing of time. The ‘offcut’ pieces are only possible because he has carved out space to archive and store what to many people might just be some bits of veneer waste.

“From a young age I’d always liked collecting things, getting attached to mundane things. Football stickers and pokemon cards. I’ve kept hold of these offcuts, and I can remember the piece they were cut from or I can remember when I was cutting them. I like to keep them in semi organised sized boxes, I enjoy the feeling of flicking through and selecting the ones I like for a composition, even though it was kind of rubbish. Keeping these precious objects, and then displaying them in this way, is a nod to my childhood, seeing the beauty in these things, and giving them a second life. So many people have appreciated these works and the other offcuts pieces for that reason, I think it touches people in that way.”

I wonder how many of us feel the overwhelm of a world so frenetically full of stuff, a lot of it just packaging, instantly shed and discarded. Fathers continues his pursuit of the precious everyday, the reconsidered discarded, with a series of small works- postcard sized relief sculptures built out of fruit and veg boxes from Electric Avenue.

we all need to start seeing the world in this way. That every little part of our lives has been cut down, or mined, or drilled out, or picked, and then processed by human hand/machine collaborations, often through a surprisingly long chain of processes. This goes as much for the shells that our products come in, as the products themselves.

“That’s the thing as well, I love trees! And I’m aware that trees have had to be sacrificed to make the wood veneers, and I feel like they’re such a precious entity that I don’t want to be disregarding any of them. I’ve become more cautious about the veneers I use now, and I’m looking into ensuring that I know where the veneers are coming from. They are so precious and beautiful that they deserve to be looked at in this way.

The veneers are such a small amount of material, compared to when I was doing set construction, or behind the scenes doing instals, the amount of waste is horrendous. It’s partly why I had to stop doing it, because seeing all that waste was so painful. A lot of the stuff I do comes from seeing beauty and using everything.”

The craft itself can be so immersive for an artist, that getting the work out there, and therefore sustaining the practice, can get left behind. Fathers’ has had to be disciplined in building his profile, but that has paid off.

“Not that I didn’t take that seriously before. But actually around this time last year, I started just thinking about how I present myself and Instagram a bit more. And just making it a little bit more obvious what I do. It’s actually just taking those few little steps, making sure that the photos are all presented in a clean, square, straight way.”

The thread of time is still winding through, the time to properly document and present the work, in the way that portrays the beautiful materials with the respect they’ve been shown through every stage of Fathers’ work. This discipline has allowed Fathers’ has built his own audience, outside of the traditional gallery model.

“I mean, not the followers is everything on Instagram, but I’ve gained 15,000 followers this year. Which has been amazing. And I was never expecting to do that. A lot of opportunities have arisen. And a lot of things like commissions and stuff have come. It still sort of baffles me that people are prepared to do that, just from their Instagram, but it has happened. I don’t want to be a slave to it. But at the same time, ultimately, I don’t have a gallery. I have been approached by quite a few, but I’m sort of holding off for the right sort of one to come along.”

It’s a win-win; stumbling across unusual works like Fathers on your feed must feel like you’ve hit the jackpot, and it allows Fathers’ some freedom to continue doing what he loves.

“There’s lots of things that I’d like to do, and each time I make a piece with the wood veneer, I’m learning and thinking- ‘I could make that a little bit tighter or I can handle the wood better’, all these different things that I’m learning each time, and I’m just imagining, in hopefully ten or twenty or even thirty years time they can only get better and better, they can get bigger or more intricate. And that’s something I love about this process, it’s got so much scope for development.

I’ve got such a respect for master craftsmen who are just the best at this particular thing. It’s nice, the thought that I’m only going to get better at this, and its such a niche thing that I’m doing, hopefully it’ll develop into bigger and better things, and be more intricate and more appreciated. I’ll be able to continue to explore. Marquetry is obviously quite well known, but it’s quite dated, there’s very few people working in it. I like to think that I’m progressing it as a craft and bringing it to life for other people.”