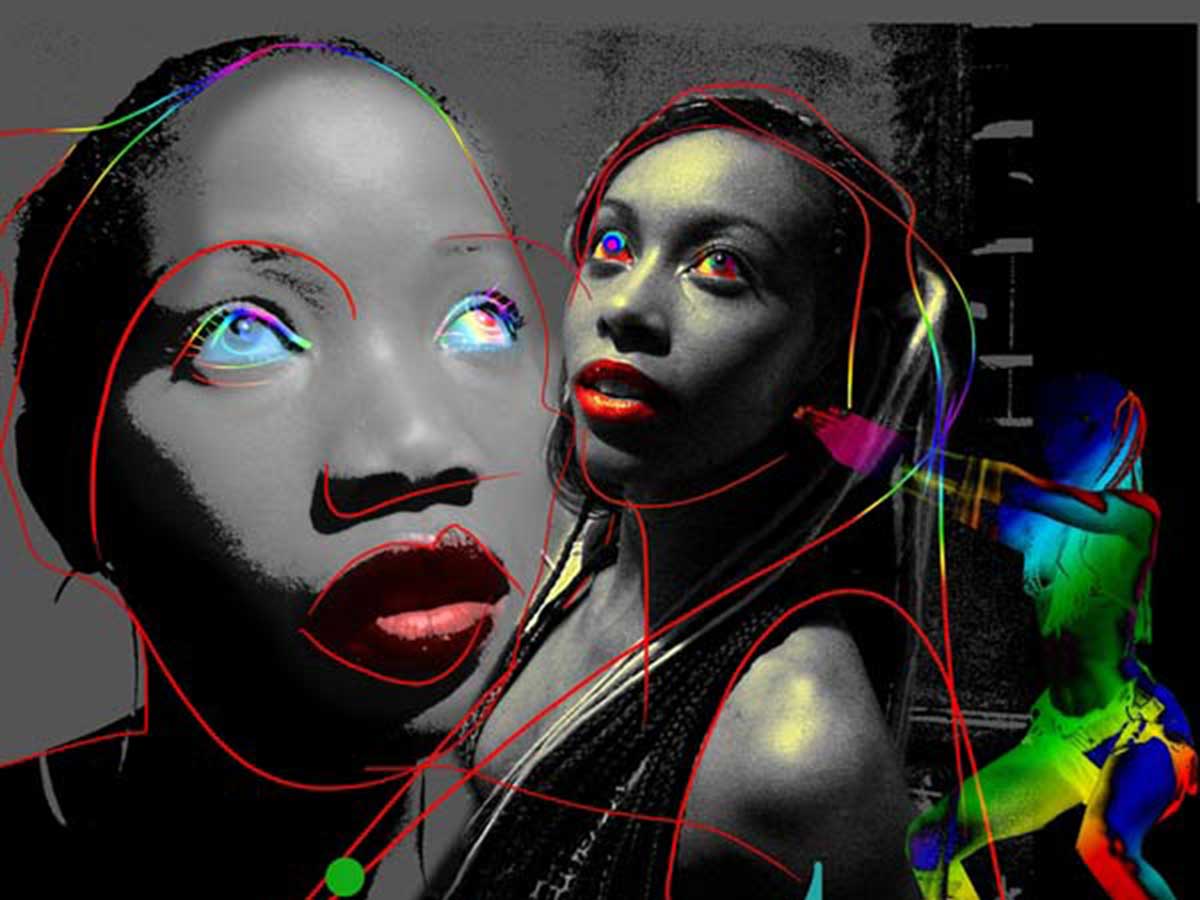 The Bloodettes is said to be Africa’s first lesbian (debateable) vampire sci-fi horror film. If that sounds like a wild ride, that’s because it is.  Jean-Pierre Bekolo’s magnum opus features Majolie (Adèle Ado) and  Chouchou (Dorylia Calmel) as two best friends and sex workers on the lam from the law after Majolie accidentally kills an important government official. What culminates is a revolutionary rallying cry for the positive transformation of a corrupt state.

The most striking aspect of The Bloodettes is its bold stylistic uniqueness and audacious political message. One may be left scratching their head towards the end, as the story admittedly gets muddled, but it’s important to not get too fixated on the individual plot details. This is a film that’s more intuitive, with overarching sentiments and themes (anti-cop, anti-capitalist, pro-feminist, pro-sex work). Its imperfections and palpable guerrilla-style filmmaking emphasises the importance of just putting your ideas out there, explosively. It doesn’t matter if it’s fine-tuned, Bekolo’s intent shines through and produces something beautiful and enduring.

This  loose structure and frantic, dynamic editing style (Bekolo previously worked as an editor for Cameroonian TV) introduces us to a new, free-flowing approach to cinema, teetering on the edge of experimental. What’s so refreshing about Bekolo’s style is that it’s avant garde without purposefully trying to be – it feels authentic and unpretentious, unsoiled by traditionally Western approaches to political or radical media.

Where is Bekolo coming from?

The Bloodettes is an amalgamation of many different things – sci-fi, neo-noir, comedy, horror, a road trip movie, a film about female friendship, even a political treatise. Bekolo has stressed the importance of making a film that includes recognisable genre motifs, specifically sci-fi and horror ones, because the genres are known so well in Western media. Bekolo’s aim was to replicate those genres in African cinema, despite the physical (e.g. unable to do car chases) and ideological (one of the intertitles in the film reads “How can you make a horror film in a place where death is a party?”) limitations, but still make it recognisable as a genre film instead of something lumped into the all-too-broad “genre” of “African Cinema”.

In Bekolo’s 1996 film Aristotle’s Plot, which also features his biting wit and satirical humour, the protagonist asks: “Why are African filmmakers always young, upcoming, promising, emerging, developing, until they are eighty years old? And then suddenly, they become the ancestor. The father. The wise old role model.”

Aristotle’s Plot is largely an examination of African films/filmmakers and how they are perceived by the rest of the world, and an interrogation of the effectiveness of cinema when it’s applied to non-Western cultures. Bekolo reiterates this sentiment again by setting The Bloodettes in the future, but making it largely applicable and relevant to the present day – taking grievance with how “there is always this idea about Africa that the past and future can’t really connect”.

Mevoungou was a pre-colonial ritual and secret society native to the Beti women of Cameroon. It was eventually suppressed by German missionaries from the Catholic church. Mevoungou focused on purification and celebrating the sexuality of women – in her dissertation entitled Genital Power: Female Sexuality in West African Literature and Film, Naminata Diabate writes:

“The power of the Mevoungou is predicated upon the clitoris, which is seen as the exterior physical site of this powerful gland. The leader of the society, called the mother of Mevoungou or Mevoungou Mba in Beti, is chosen on the basis of the large size of her clitoris, believed to represent the extent of her power and fecundity. She is a woman past menopause who no longer engages in heterosexual intercourse.”

Majolie and Chouchou’s sensual hybrid fight-dance style (originating from Senegal) represents the harnessing of Mevoungou for help – whether it’s escaping from a police raid, or defeating the big bad boss at the end of the film. It evokes the afrofuturistic idea of calling upon your ancestors for empowerment and strength. The idea of Mevoungou being a deadly revolutionary force implies that the power of transforming a corrupt post-colonial state is in the hands of Majolie and Chouchou.

The Bloodettes is a story of genuine female empowerment in every sense of the term.  Bekolo has written this tale as not just women finding themselves or discovering the woes of oppressive patriarchy – they knew all of that already – this is written as two women using the power of ancient gynaecological African traditions to extinguish a malignancy that has seeped into society. Their existence is political – not on purpose, but because of what external forces like religious institutions and governing bodies impose on them. Bekolo declares, “the body of the girls is actually the only weapon they have”.

My favourite things about the film:

Films to check out if you liked The Bloodettes:

Set up by local film enthusiast Abiba Coulibaly, Brixton Community Cinema is a pilot-scheme pop-up screening event. The objective of the cinema is to bring affordable international and independent film to a community who, despite immense cultural contributions, face uneven access to arts institutions. Read more here.