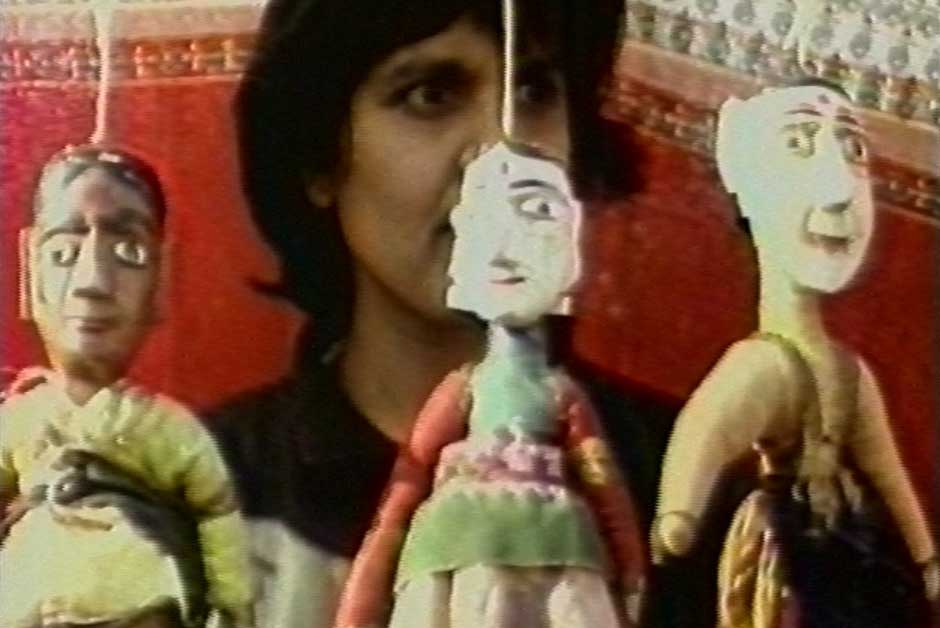 Pratibha Parmar is an under-appreciated heroine of British filmmaking. For four decades, Parmar has made provocative, playful and progressive films which dig into questions of identity with nuance and style. An activist at heart, Parmar has frequently confronted taboos, taking on AIDS stigma in Reframing AIDS (1987), Female Genital Mutilation in Warrior Marks (1993), and disability and sexuality in Double the Trouble, Twice the Fun (1992). Watching today, it’s remarkable how often Parmar’s films confront current hot topics, touching upon timely questions around cultural appropriation, tokenism and institutional racism. Yet while the issues she discusses are vital, her films never feel like hard work. Parmar’s films brim with punk spirit, taking on tricky subjects with verve and vibrancy, while refusing to water down her subject matter for a white audience.

So why isn’t Parmar your favourite documentary maker? While she’s long been a legend in feminist circles, her films remain underseen by wider audiences. Part of the reason for this is that much of her work is not straightforward to stream digitally and public access remains patchy. In June, however, there was a chance to see several of Parmar’s rarely screened films as part of a two-part retrospective organised by the London Indian Film Festival.

The prolific Parmar is not easily pigeonholed – alongside documentaries, she’s directed fiction shorts, features and television, including most recently an episode of Ava DuVernay’s Queen Sugar. It’s impossible to summarise her work in two screenings, so LIFF have chose to focus on her films which examine British Asian and diasporic culture in the 1980s and 1990s. The result is a fascinating time capsule, a glimpse into a unique socio-cultural moment, and a call to arms for audiences and artists today who feel frustrated by how far we still have to go.

Right from the start, Parmar has used her platform to centre other artists. Her first video piece, Emergence (1986), collages together the work of African American poet Audre Lorde, Palestinian performance artist Mona Hatoum, British Indian conceptual artist Sutapa Biswas and Guyanese Chinese writer Meiling Jin. It’s easy to draw shallow parallels between these artists – all women of colour, all from diasporic backgrounds – but Parmar’s skill lies in her ability to draw out commonalities without oversimplifying.

Instead of lumping her subjects together, Parmar builds a distinct visual world for each artist. So, Biswas stares out at us confrontationally in front of her large, colourful canvases, while Jin is shot bathed in bluish light, half in shadow, reciting poems with forceful passion. Hatoum sits at a table, calmly describing a performance – “a statement about the persistent struggle to survive in a continuous state of siege” – framed with an intimacy that makes it feel as if we are sat right across from her. Most striking of all is Lorde, who appears hovering on a screen, every inch the star in black sunglasses, her electrifying words beamed in like a dispatch from another planet. By allowing these artists to shine as individuals, Parmar creates space for the audiences’ own interpretations. The result connects art across mediums and geographies, without flattening difference.

This ability to celebrate artists from diverse backgrounds without defining them purely through identity politics is a key strength of Parmar’s filmmaking. It would be easy to suggest that this skill stems from her own intersectional identity – Parmar is of Indian descent, moved from Kenya to the UK as a child, and is openly queer – but in the spirit of the filmmaker, let’s avoid such a simplistic conclusion. While context is helpful to an extent, it is only one piece of Parmar’s overall creative identity.

Parmar often profiles other artists, but that does not mean that her filmmaking purely serves the work of others – these films reveal as much about her own artistry as they do about her subjects. Memory Pictures (1989) and Flesh & Paper (1990), are two short profiles, focusing respectively on the photographer Sunil Gupta and the poet Suniti Namjoshi, both artists born in India who are now based abroad. Both films include extended interviews and insights and snapshots of the artists’ work, but they also demonstrate a creative ambition that stretches beyond simple biography.

In Memory Pictures, a mysterious storyteller (Meera Syal) serves as a kind of narrator, reciting verse, reflecting on the nature of memory and eventually appearing at the film’s conclusion as a visitor at Gupta’s exhibition. Syal’s character places Gupta within a tradition of diasporic storytelling, connecting his photography, which explicitly explores his identity as a gay, Indian man in the US, with the hidden histories of his forebears. In a scene that feels keenly relevant to today’s culture wars, Syal stands before a statue of Lord Lawrence, Viceroy of India, and scornfully challenges the monument’s vague plaque. “You called it a mutiny, we call it a war of independence,” she declares. “Through these twists and turns of history we meet again and again, and we remember the blood and the bones that have turned to dust.”

Flesh & Paper has a gentler, dreamlike feel, with gorgeous imagery of crashing waves and traditional Indian dancing intercut with Namjoshi’s readings. Here it’s the poet’s own words that draw out the politics. “In India I had been mainstream, so it didn’t occur to me that anyone would want to patronise me,” states Namjoshi, reflecting upon her experience moving to the US as a young woman. “When I realised what was happening, I became vicious for the first time in my life.” Elsewhere, she describes how the ways we communicate are shaped by our identity.

All of us… we only think what we are able to think in terms of the ideas available to us. The structures, the symbols, the ways of thinking… These are reshaped and so new perspectives, altered perspectives become possible. For a lesbian feminist writer, that’s a constant struggle. For an Indian writer writing in English, that’s a constant struggle as well… you have to make the language that will help you express that particular sensibility…

Reading this, it’s easy to draw parallels with the director herself. Parmar is working within the structures and symbols of filmmaking, but she is constantly pushing against the boundaries of the form, searching for ways to express what she needs to within the language at her disposal.

Parmar’s most accessible films document the extraordinary explosion of British Asian culture in the 1990s. The Colour of Britain (1994) profiles a number of artists and performers, including the sculptor Anish Kapoor, choreographer Shobana Jeyasingh and the Tara Arts Theatre Company. The film celebrates a range of artists who are united only by their shared South Asian heritage and by the challenges they face in creating work within overwhelmingly white spaces. Again, parallels with today are obvious. When Jeyasingh remembers reviews which discussed her performances using curry puns, or actor Shelley King describes playing six “Mrs Patels” in one year, we tentatively hope we have moved some distance. But when a voiceover states that “while many artists have passionate feelings about [racist attacks] on their community, they demand freedom to create without having to limit themselves to the themes of racism and migration,” the clang of recognition is unavoidable. The freedom to create work that is not defined by your identity, remains out of reach for many artists.

The wildly entertaining Brimful of Asia (1998) covers similar ground, but this time with a focus on youth culture. Here a number of ‘90s icons, including bands Cornershop and Asian Dub Foundation, DJ Bobby Friction and producer Talvin Singh, excitedly discuss an emerging scene spearheaded by ambitious second-generation creatives. This new generation preside over a truly multi-cultural fusion of South Asian and British culture, embracing their dual heritage to create something new. The tone is generally ebullient, confronting cliches and taboos with cheeky confidence. In one scene a photographer styles a group of young Asian women as skinheads, while in another ADF rapper Deedar describes performing a song about a mixed relationship, “when we play it on stage we say, now it’s your chance to dance on the grave of Enoch Powell.”

Yet while the overall mood is optimistic, again Parmar digs into tricky nuances. Images of catwalks full of white models wearing saris and photos of celebrities such as Princess Diana wearing bindis, suggest a note of scepticism about the true depth of the mainstream’s interest. When playwright Parv Bancil describes the “new Asian cool” as “a very damaging idea… it means that something that comes into fashion is going to go out of fashion,” a contemporary viewer might instantly draw parallels between this commodification of a cultural identity, and the recent co-option of the BLM movement by corporate brands,

In hindsight, this scepticism was justified. The mainstream did move on, and that particular flowering of British Asian culture was curtailed in the early 2000s when the War on Terror precipitated a racist resurgence of anti-immigrant sentiment. Twenty years later, as we look back at Brexit, Trump and the Pandemic, optimism can be hard to come by.

Yet while it can be painful to see how this promise was squandered, watching the films of Pratibha Parmar is ultimately a hopeful experience. Her beautiful, compelling films capture a moment, prove that today’s issues are not new, and celebrate those who create in the face of indifference and hostility. Parmar herself practices what she preaches, and like all the best artists, she captures her present-day reality whilst simultaneously pointing to the future. As Meera Syal’s Storyteller repeats in Memory Pictures: “We who are migrants are always coming home. And in any circle the beginning is the end.”