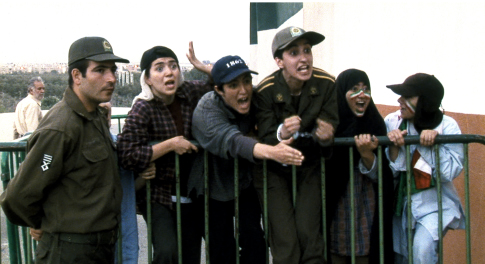 Jafar Panahi has established himself as one of the most vital forces in contemporary world cinema over the last two decades. He started his filmmaking career as an assistant director for the great Iranian filmmaker Abbas Kiarostami and later continued the master’s approach and reshaped it to contain more specific, socially sensitive subjects. Despite their international recognition, most of his films have been banned from being shown in Iran, as they openly depict and courageously criticise social and cultural issues. Through his innovative methods and subtle viewpoint, Panahi’s focus on topical subjects and Iranians’ mundane lives effortlessly highlights their overlap with the political realm. In this regard, he is a political filmmaker who fearlessly condemns the tyrannical Islamic regime which has oppressed and tortured Iranian people since the 1978 revolution. Panahi made his films of immurement—This Is Not a Film (2011), Closed Curtain (2013), Taxi (2015), Three Faces (2018), and No Bears (2022)— while he was banned from filmmaking in Iran. He has also been arrested several times and right now is serving a six-year prison sentence.

The remarkable oeuvre Offside (2006) is his most accessible film, which simultaneously entertains viewers, develops several crucial themes, and conveys an unsettling message. At first glance, it is a film about football and a group of football fans. However, as with many other things, the concept of fandom is gender-based in Iran; female audiences are prohibited from watching the games in the public sphere of stadiums. For years, many girls have tried to enter the football stadiums by disguising themselves as boys and occasionally they have succeeded. The subjugation of these defiant girls is the central focus of Offside narrative.

Like his other films, Panahi here interweaves documentary and fiction; the locations, the handheld camera style, and the sound design are documentary-like, some scenes were even shot secretly during the real match between Iran and Bahrain in Tehran’s Azadi stadium. The casting of non-professional actors also adds to the verisimilitude of the film, which makes us believe that they are real people in real situations. However, the characters, their woes and personal stories, their dialogues and conversations, are all fictional. The characters may even appear as stereotypes, which is of course intentional, as they represent different social classes of Iranian society; an innocent naive girl, a tomboy, a professional soccer player, and a girl from a very religious family are gathered together. In the second half of the film, an enthusiastic girl in an officer’s uniform joins them. Through the encounters between these five girls and the soldiers, Panahi reveals the different layers of discrimination and suppression of women.

However, the soldiers are not depicted as repressive misogynistic men. Jafar Panahi has always had a humanistic approach towards his male characters. The soldiers, mostly from small villages, are serving their compulsory military service. One of them is worried for his ailing mother and farm, and is afraid that his superiors may extend his conscription if he sets the girls free. The young men are also victims of patriarchy and more than that, victims of a malicious theocracy. Panahi gathers his characters in a shared space outside of the main stadium, however it seems that they are confined in this outdoor space, both boys and girls.

Not only is Offside a bold critique of the Islamic regime, it’s also a beautiful and well-structured film which unfolds in real-time. This technique engages the viewers who experience the events as if they are happening before their eyes, with the film’s social realism lightened by its humorous tone and deadpan comedy. The shot composition and the narrative structure are meticulously designed, and the dialogues are brilliantly written with multiple contrasting meanings.

The film’s imagery is piercing and impressive despite its plain cinematography. One of the most memorable images is formed when a young female fan wears a mask made from a poster of famous Iranian football player Ali Karimi, in which his face appears both comical and troubled. Right now, as the Iranian people are protesting in the name of ‘Woman, Life, Freedom’, Offside becomes a much more crucial film. Ali Karimi is a fierce supporter of the protests, Jafar Panahi is in jail, and Iranian women are leading a revolution against the brutality of the Islamic republic, a glimpse of which has been captured in Offside which was after all a hopeful journey, from danger and fear to friendship and sympathy among people.

Azadeh Jafari is a film critic, writer, translator and a member of FIPRESCI (The International Federation of Film Critics). She regularly contributes to different film magazines, newspapers and journals in Iran. Her English writings on world cinema have appeared in Cinema Scope, Film Comment, Reverse Shot, LOLA, and the TIFF (Toronto International Film Festival) website.

Set up by local film enthusiast Abiba Coulibaly, Brixton Community Cinema is a pilot-scheme pop-up screening event. The objective of the cinema is to bring affordable international and independent film to a community who, despite immense cultural contributions, face uneven access to arts institutions. Read more here.