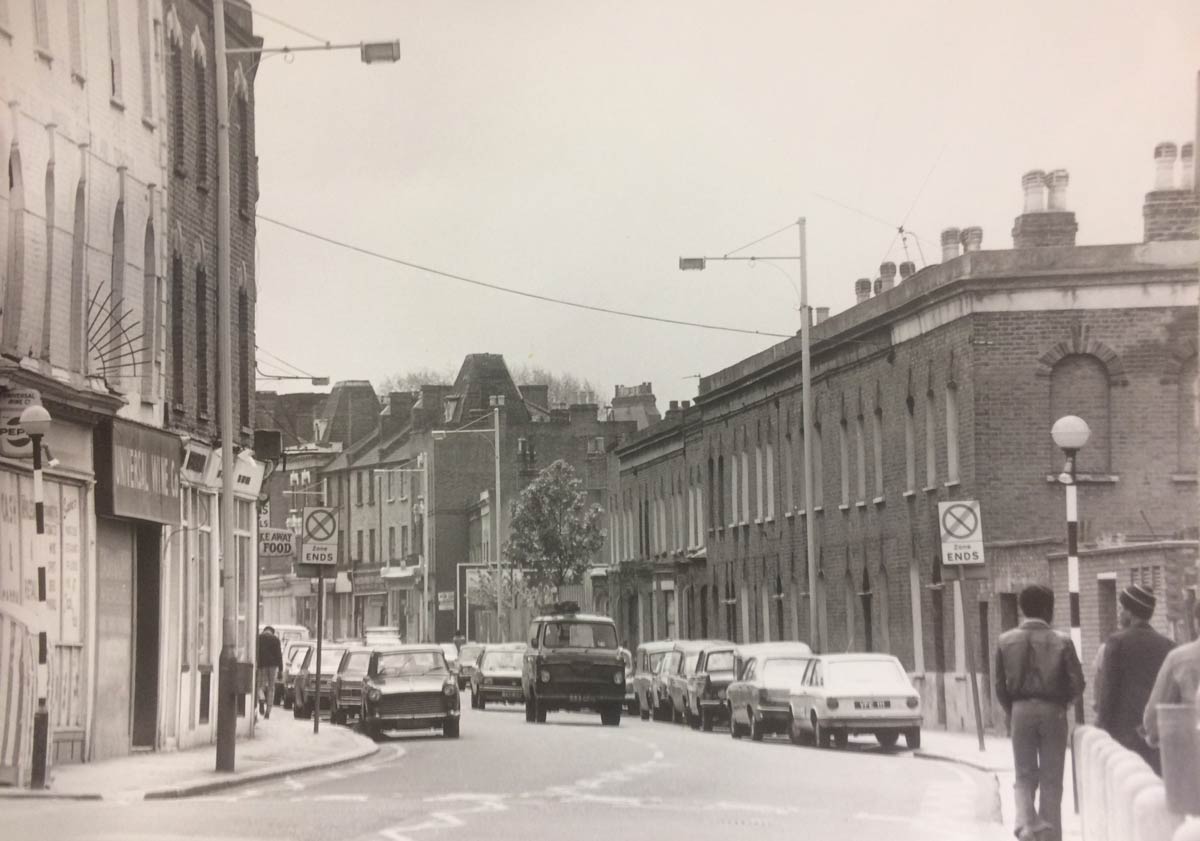 Railton Road has been the centre of a vibrant and often brutal history. Bearing witness to uprising, erasure and resistance, its history and legacy stubbornly and joyfully persist. This April presents a moment to not only reflect on the events of 1981 but to look at the radical histories that shaped the road and that can in turn shape a progressive local future.

I’m walking south from The Atlantic along Railton Road, heading towards Herne Hill. On my right  there’s a small brick substation and immediately after, Dexter’s adventure playground. Dexter Road, which gives its name to the playground, is now Montego Close and there is little trace of the row of Victorian terraces (Nos 1-49) which once occupied the site. Opposite the playground fencing is another site which has changed dramatically since the 1970s and 80s. This was the northern end of Railton and Mayall roads – ‘the triangle’, where the Universal Wine cash and carry marked a pointed end and three-storey back-to-backs and shops at ground floor lined each flank to their junction with Leeson Road. These homes and shops were by Lambeth’s admission, in “very poor condition” and had already been compulsorily purchased and torn down pending redevelopment by the time of the uprising, with nothing remaining today. The new roads and housing which came to replace the triangle may have born the names of black figures: Marcus Garvey and Bob Marley Way, but were sadly not born from a community-led redevelopment process. The less grand but perhaps more humane vision for retention, repair and renewal put forward by the Railton People’s Planning Association, which would have seen many buildings and occupants kept in place was sidelined and with it the built and social history of this part of Brixton.

The site to the west of the triangle, where I’m now standing, took a different path. What eventually came to occupy this alternative site was an adventure playground: a space dedicated to young people, who are so often marginalised in urban planning, to play freely and openly. By making space in this way, Dexter Road Adventure Playground became part of a partial vision for Railton Road as a unifying and experimental sphere more akin to the progressive organisations which lined used to line its length. In the forty years since 1981, the architecture of Railton Road has visibly and undoubtedly changed, but the values of the spaces of action and resistance which made the road so unique must now be reassessed to shape a vision for the area’s future.

Railton Road has witnessed many firsts, both for London and for Britain, from the country’s first black hair salon, opened by the singer Winnie Atwell in 1956 to the city’s first gay community centre opened by the Brixton Fairies twenty years later. From Race Today and the British Black Panthers to Olive Morris and the 121 Centre, the road has been home to a remarkable collection of people who jointly had the courage and vision to create institutions and spaces to support and cement the presence of black people, queer people and many others who faced an openly hostile national society.

The presence of such pioneering organisations and institutions was aided, for better or worse, by the relative flexibility Railton Road offered during the second half of the twentieth century. The vacancy and wider economic decline of the area were punishing factors but allowed communities to create and inhabit space in forgotten buildings and terraces, to build support networks and to unapologetically exist. Yet it was exactly this precarity and perceived ‘decline’ which led to the physical loss and redevelopment of much of the road itself. It’s clear from such actions that history can be eradicated and stories suppressed, but when we interrogate the past in all its complexity, those histories can become a tool to evaluate a present and shape a future.The fortieth anniversary of the April uprising presents a moment to not only better understand that history, but to use the best of it to build a new vision for Brixton.

Looking through the timber fence panels which line Dexter’s I see a microcosm of that wider history. A site which was built, razed, reinvented and made public. A site which has lain silent for too long and is now ready to return to the community. Reimagining Dexter’s does not simply mean reanimating the site, but reconnecting the site with its context and with young people, developing a flexible space for all ages to contribute their creativity and spend time in one another’s company.

Krish Nathaniel is an artist and spatial practitioner commissioned by the Brixton Project to develop a creative change installation with young people for Dexter’s adventure playground as part of 81 Acts of Exuberant Defiance read more about Play Futures here.